A complete guide to the highest navigable lake, Lake Titicaca. How to travel to Lake Titicaca, the best places to see, some unknown facts and everything in between. 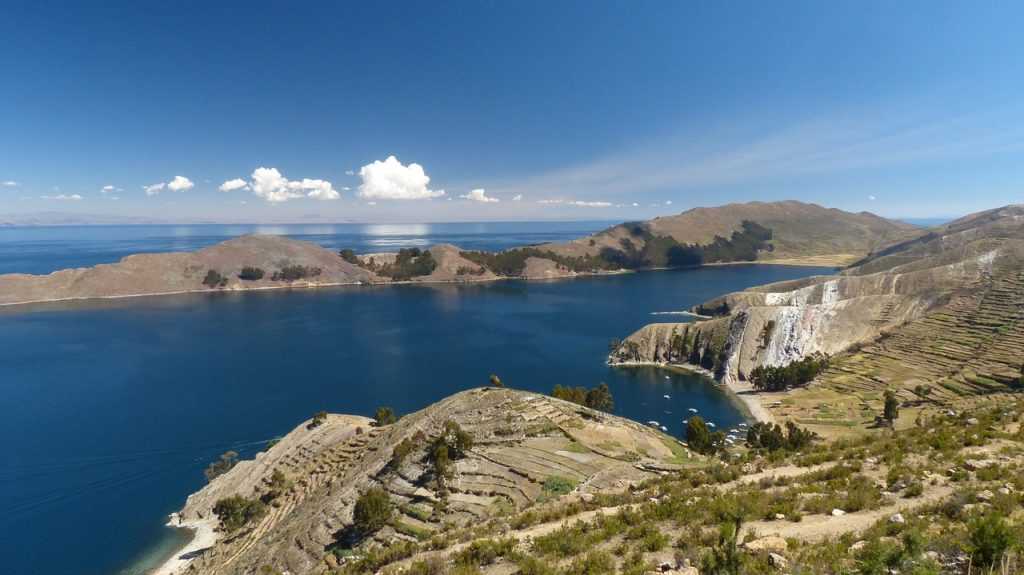 Everything you need to know about Lake Titicaca

Here is a summed-up version about lake Titicaca that will provide you with all the know-how you need to prepare your itinerary for lake Titicaca or if you are just an enthusiast and want to learn more. You are at the right place.

What is unique about Lake Titicaca?

Lake Titicaca is the world’s highest navigable lake, it is the home to one of the most fascinating indigenous groups of South America the Uru people. According to Andean legend, Lake Titicaca was the cradle of civilization and the birthplace of the primary Inca.

Lake Titicaca sits withinside the Andes mountain range, and the Incas believed it is the first vicinity of the Sun and its’ human beings.

The most remarkable thing about Lake Titicaca is the floating Islands and the people who live there. About 4’000 people are living on the islands in the middle of the lake. These people are called Uros and the daily life and history of the Uros people of Lake Titicaca are intriguing and unlike any other in the world.

With more than 25 rivers and glaciers feeding it it is the biggest lake in South America. The lake is shared between two countries Peru and Bolivia, with fifty-six percent of the lake being in Peru and forty-four percentage in Bolivia.

Where is Lake Titicaca?

Lake Titicaca is the world’s highest lake navigable to large vessels, lying at around 4000 meters above sea level in the Andes Mountain range of South America and it is the largest lake on the continent, astride the border between Peru to the west and Bolivia to the east.

Name of the lake

So nobody knows where the name Titicaca comes from. It is assumed that the native people who lived alongside the shores of the river named it so. If you ask the locals you will be provided different names for the lake including Lago Huinaymarca, Lago Chucuito, Lago Pequeno, or Lago Grande, depending on which side of the lake you are at.

How to get to Lake Titicaca?

Reaching Lake Titicaca may seem an arduous task if you do not carry a perfect guide like this.

The way to get to Lake Titicaca may differ from person to person depending upon their inclinations. There are several factors like mode of transport, budget, and timings.

The air route will obviously be the fastest means of transportation but it will greatly reduce the pleasure of traveling through the beautiful landscapes that fall along the way. This is one of the prominent reasons that railways and roadways are the most preferred means to get to Lake Titicaca. They allow you to experience gorgeous scenic beauty as you go. Cusco and Arequipa are the stations that lead you through the towns and villages that offer you glimpses of the ancient lifestyle of the Peruvians amidst the overwhelming landscapes.

Going through the roadways

The quality and facilities vary accordingly. This choice would be pocket-friendly. Though, some of the companies such as Cruz del, Sur, and Ormeno still rank highest among most of the travelers in Peru. The travelers are always recommended to take care of their belongings and valuables in the journey.

There are no airports available in Copacabana and Puno. As soon as you reach Copacabana you may fly to Juliaca, Peru, which is about an hour’s travel from Puno.

PeruRail provides train services between Cusco and Puno. PeruRail also aids travelers with catering to make the travel experience more comfortable and convenient. It takes about 10.5 hours to reach lake Titicaca from Cusco. The trains are scheduled to depart on Sundays, Wednesdays, and Fridays. 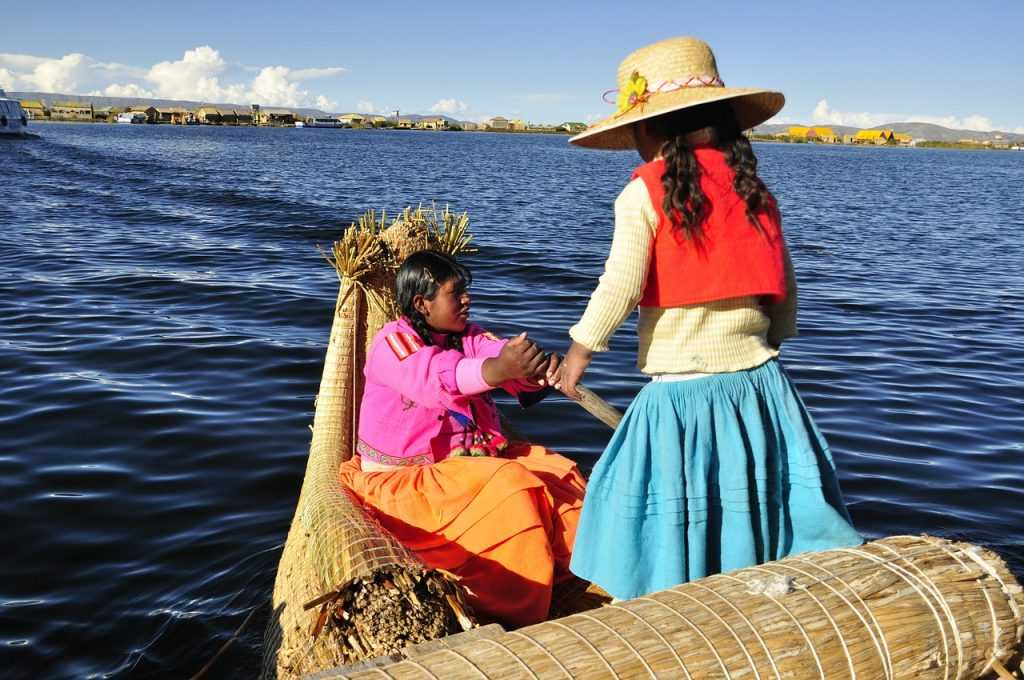 Everything you need to know about Lake Titicaca

Here are some fun-to-read facts about the lake in no particular order.

Lake Titicaca is spread along 190 kilometers with a width reaching almost 80 kilometers. Although it is far smaller to compete in the league of the largest lakes in the world.

It is commonly claimed that lake Titicaca is the highest navigable lake, the fact of the matter is that it is the highest elevation navigable for commercial vessels, one such example would be a steamship weighing a whopping 2000 tons that were built around 1931 and navigate the lake till date.

Lake Titicaca is not only the continent’s largest lake but also the largest by volume as it has a maximum depth of around 280 meters.

The interesting thing to note about the lake is that it has multiple inflows but only one outflow. The lake Poopo in bolivia which is a saline lake at a high altitude in the Altiplano mountains is the only eventual outflow of Lake Titicaca.

What makes it more interesting is that this outflow to Lake Poopo only accounts for ten percent of the river’s water outlet. The rest of the water is reduced by evapotranspiration, due to the strong sunlight and powerful winds at such a high altitude the water evaporates rapidly. An interesting fact around this idea would be, when water enters this lake, it takes around 1300 years for that water to flow out of it.

There are a total of around 41 islands on the lake and most of them are populated. These precious islands contain Inca ruins that date back to the 15th century.

Problems in the Lake Titicaca

The sad side of the story is that due to the rapid evaporation and global warming, the water level on the lake is falling at an increased pace. In the year 2009, it dropped around 32 inches.

That is not the only disturbance lake Titicaca is facing. The marine life and biodiversity in and around the lake are also under serious threat. Due to the growing population around its shoreline and the lack of proper sewage treatment. It was even, for the lack of a better word awarded “threatened lake of the year” in the year 2012.

HOW THE UROS FLOATING ISLANDS ARE BUILT?

There are around 60 man-made artificial islands located on the lake Titicaca. The people of the lake are referred to as the Uru people who constructed synthetic islands out of the flora that develops abundantly alongside the shallow components of the lake. This lifestyle of constructing the islands dates back to pre-Inca times.

These islands that are commonly known as floating islands are created by the Uros.

The lives of these indigenous people are interwoven with these reeds. The reeds are partially edible and are used as construction material.

Even the boats used by the Uru people are created using a similar kind of reed. 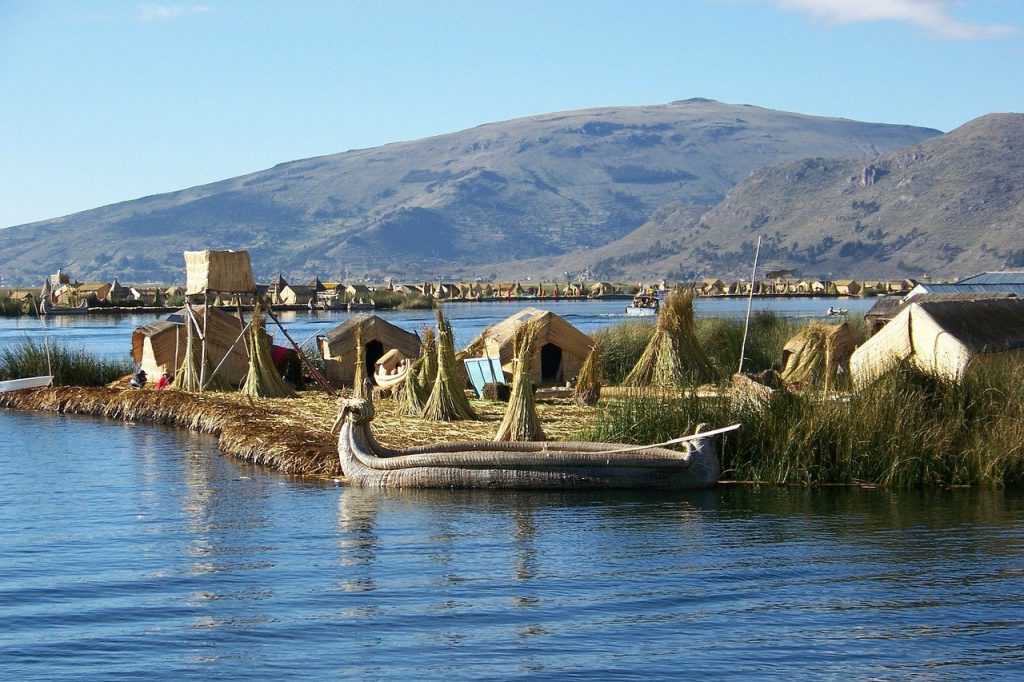 7 locations to visit in and around Lake Titicaca

There are two countries alongside the lake namely Peru and Bolivia and both countries have a lot to offer to tourists. Here is a list of places you must see while visiting Lake Titicaca –

Lake Titicaca is a sight to behold with its biodiversity, the two countries engulfing it on each side, and the islands within it.

If you love to visit new places and experience new cultures, Lake Titicaca is something you shouldn’t miss out on.